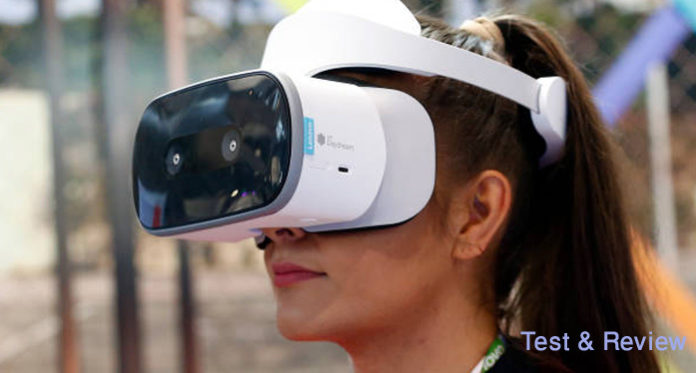 Here is the test and review of the Lenovo Mirage Solo standalone VR headset. A machine that does not require a computer or smartphone to work. Faced with a high performance Oculus Go, this headset seeks to be a direct competitor of Facebook’s product with mixed success.

Virtual reality is now well established, but its products are still far from autonomous. Whether it’s a PC or a smartphone, a whole system usually needs to be set up to take advantage of the VR experience.

After the landing of a pioneering Oculus GO, the competition soon followed and is now embodied in the Lenovo Mirage Solo. Can this headset win against his direct opponent? The answer in test & reviews.

Unboxing of the Lenovo Mirage Solo: a package (too much?) 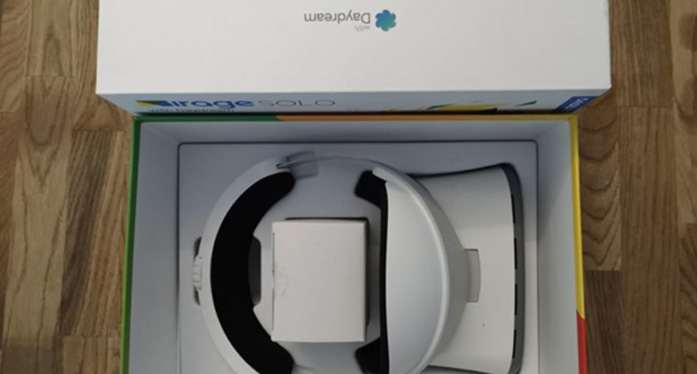 The least we can say about the box of the Lenovo Mirage Solo is that it is impressive. Even before its opening, we know that we cannot transport it anywhere. Design side, we find a majority of white, with some colors making it all more beautiful. Few indications on its faces, if not a visual of the device and a representation of its major functions.

The content of the package is classic, but complete. Inside, the headset itself, a user manual and a USB-C charger. Note the presence of headphones, rarely included with this kind of product. Nothing surprising in this opening so, if not this headset quite large compared to the competition. 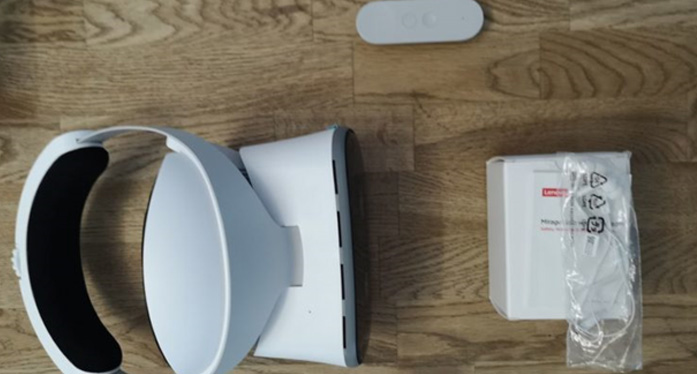 As stated in the unboxing part, the Lenovo Mirage Solo is imposing. Its design follows that of the PlayStation VR, with a rigid support to fix on the skull. It quickly raises several problems of comfort. Although it is possible to manage its spacing with a knob, it is difficult to find a really nice position. Either the front part of the headset falls on the nose and blocks the breathing, or it so tightens the head that it hurts after a few minutes. Second problem we face quickly: the heat. It does not come so much from the machine as from its protective foam. In addition to being quickly irritating, it makes sweat in minutes. When the battery, it takes between two hours and two hours thirty depending on the use made, be the average for this kind of object. 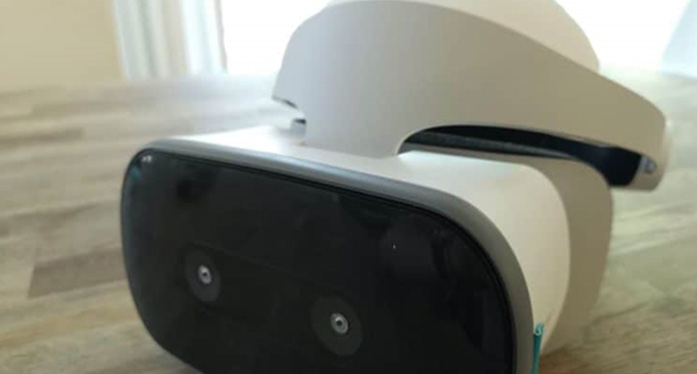 There is not all that bad in this Lenovo Mirage Solo. The easily accessible SD port or the ability to move the screens away from their eyes with a button is very convenient. Unlike many VR headsets, there is also the problem of “outside view” which prevents a good immersion. That said, we still face an object with a design that is not very engaging, quite heavy (645 grams) and bulky. It is hard to imagine someone carrying such a device in a bag or suitcase to enjoy on a trip. 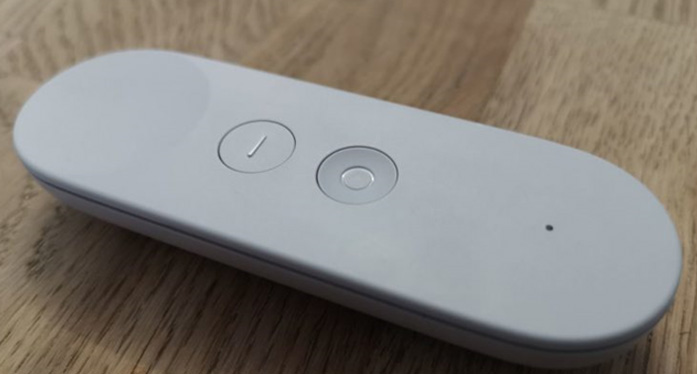 Talking about joystick here seems almost strange, so much more could we see a simple remote control. It is very basic: four buttons (menu, application management and volume) in addition to a touch pad. The latter allows both to move in the menus to interact with the environment by clicking on it.

If it is reactive, it misses a major element: a trigger. Without it, the games are both less immersive and their gameplay less enjoyable. In case of shooting, for example, it just feels like “zapping” one enemy after another, as one would do a TV channel. This controller has at least the advantage of running on battery rather than battery, unlike that of Oculus GO. 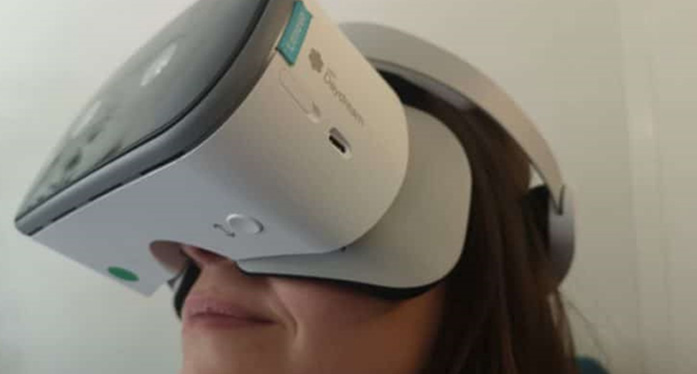 If the Lenovo Mirage Solo has not done miracles so far, it makes up for it in part with its graphic quality. With its screens 2560 x 1440 pixels, it offers a very pleasing image to the eye. No misplaced blur or decline in capacity is to be deplored. If no graphics can be compared to those of the Oculus RIft or the HTC Vive, we must not forget that it is a standalone headphones. One can only appreciate an image of this quality when no computer or smartphone is needed.

It’s unfortunate that we did not have access to Daydream’s proprietary apps. Only free multi-platform games were available at the time of the test. Impossible to give a real opinion on the library proposed by the machine. The passages in some roller-coasters and mediocre shooting games do not allow to get an idea of ​​the possibilities offered here. Note however that the controller is really not suitable for the game and we quickly get out of any experience. 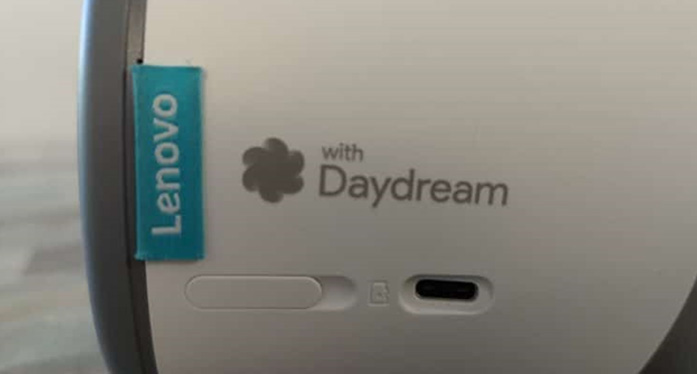 On the immersion side, everything is not so rosy. If the headset responds well to movement, its weight and construction prevent you from enjoying the virtual world. The pressure on the nose always reminds us of the reality, like the heat caused by the foam. The menu of the Lenovo Mirage Solo does not play in his favor either. It is not very instinctive and rather rough, without counting the absence of search bar which makes the navigation very difficult. This is a shame, because the headset offers a useful feature: the ability to move in space. Indeed, its two front cameras allow to move slightly around you. Well exploited, this system could be very interesting, but it is too little emphasized here. 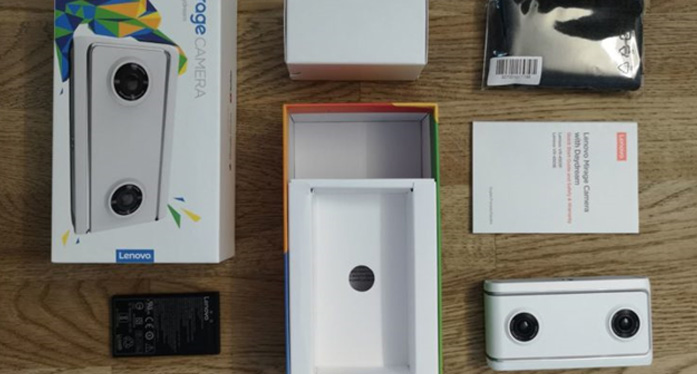 If there is one thing that surprises you when you buy the Lenovo Mirage Solo, it’s the price. While he is in direct competition with the Oculus GO ($249 for 64 GB), it is sold for $369.99. Very high, it should allow to consider real peculiarities, but it is not so. Apart from an image quality slightly higher than that of the Facebook headset, we find a product either equivalent or less efficient.

Could Lenovo’s creation be saved by additional accessories? The only one currently available is the Mirage camera. This allows you to capture photos and videos in 180 ° for later viewing on your smartphone or VR headset. A device rather “gadget” in the idea, but the price reaches not less than $335. An accessory of the Lenovo Mirage Solo is more expensive than an Oculus GO, in addition to offering relatively few additional features. Whether it’s the base product or its supplements, it’s a real cold shower in terms of cost. When the moment of choice comes, it can be decisive.

The Lenovo Mirage Solo against the competition 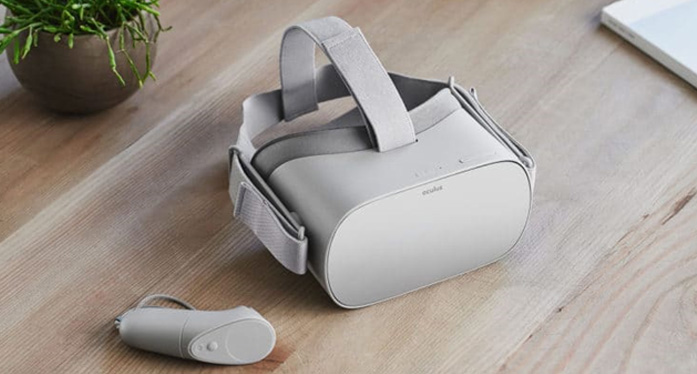 Throughout this test, references were made to Oculus GO. This is not for nothing, since it is the closest machine to the Lenovo Mirage Solo and its direct competitor. Suffice to say: Facebook’s autonomous VR headset remains the king of the genre. If we forget a graphical quality slightly lower, we are entitled to a cheaper machine and superior in several points. More comfortable, lighter, with a more intuitive menu and a more pleasant controller in hand, hard not to advise. Today, the choice is simple: the Oculus GO is the VR headset you need.

If it is not a standalone VR headset, we can still address the case of the Samsung Gear VR. This one does not require a PC to work, but a smartphone. If you already have a good laptop from the Samsung range, like the Galaxy 7, you will have access to virtual reality for fifty five dollars. Its capabilities are still well below the Lenovo Mirage Solo. However, if you want to take your first steps in VR, it is definitely a choice. 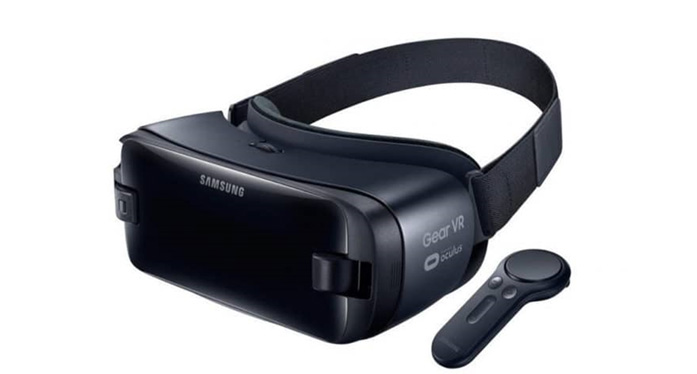 Hard not to be disappointed by the proposal of the Lenovo Mirage Solo. If he has good graphics and interesting ideas at the level of immersion, it does not go further. Its port is quickly unpleasant, especially because of its weight and protective foam. Its remote control and its menu do not offer a convincing grip, and it was not possible to test the most interesting exclusive applications. Last but not least, its price is very high compared to the competition. Suffice to say that it is difficult to recommend this autonomous VR headset when you know that you can find better on the market for less. 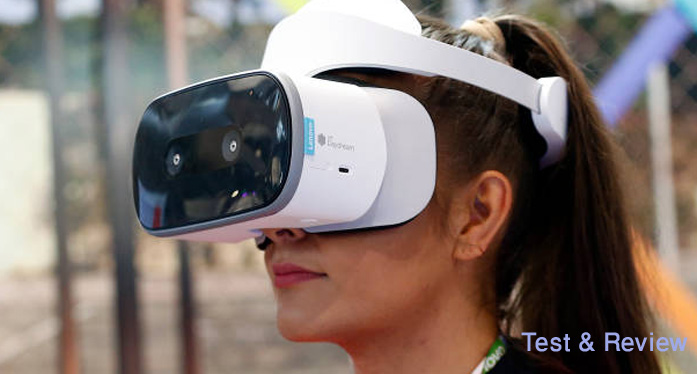