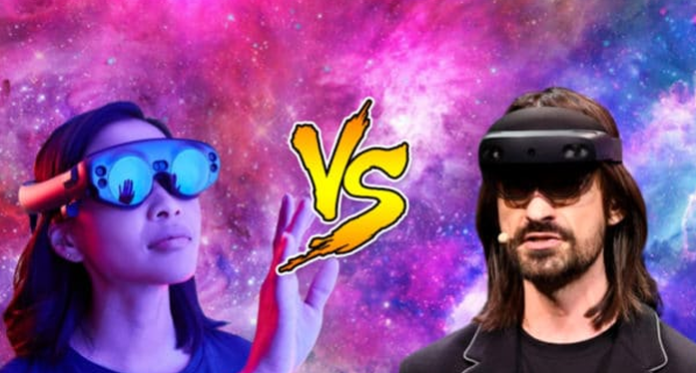 The Microsoft HoloLens 2 has just been presented at the MWC 2019. Discover what this new augmented reality headset is worth against one of the most advanced products on the market so far: the Magic Leap One.

After several years of waiting, the Magic Leap One is finally available since summer 2018 in Creator Edition for developers and enthusiasts. Until now, this augmented reality headset was considered the most advanced device on the market , even if the lack of content strongly limits its interest at the moment.

For its part, Microsoft launched its HoloLens in 2015 . Even though this device could still fit the comparison with a Magic Leap One, it was time for Microsoft to update its product . As part of the MWC 2019, the Redmond company has just presented the HoloLens 2. Find out which is the best of the two AR helmets through a complete comparison.

HoloLens 2 vs Magic Leap One: screen and image quality 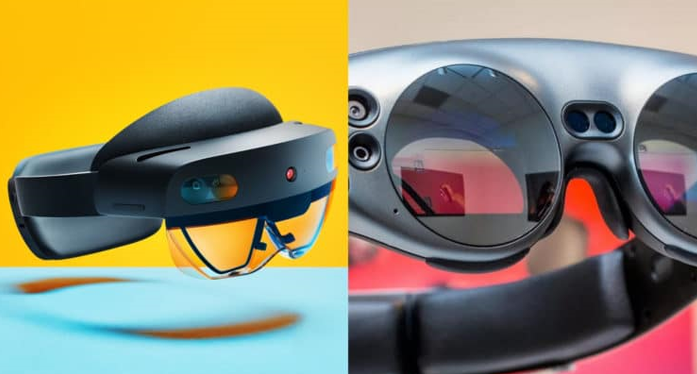 The Magic Leap One is equipped with an LCOS screen manufactured by Omnivision, offering a definition of 1280 x 960. The first HoloLens was content with an HD definition screen (720p) and a 30-degree field of view.

HoloLens 2 vs Magic Leap One: power and performance

The Magic Leap One is equipped with a Nvidia Parker SOC , and its CPU includes two 64-bit Denver 2.0 cores and four 64-bit ARM Cortex A57 cores. For its part, the HoloLens 2 is equipped with a Qualcomm Snapdragon 850 Compute Platform.

The GPU Magic Leap One is a Nvidia Pascal with 256 hearts CUDA . The HoloLens 2 is equipped with an HPU (holographic processing unit) directly manufactured by Microsoft.

In addition, Microsoft announces a future service called “Remote Rendering” for its Azure Cloud . This service will allow access to the capabilities of an external GPU via the cloud for HoloLens 2. This service will process holograms up to 100 million polygons, where the native hardware is limited to 100,000 polygons. In terms of performance and computing power, the HoloLens 2 takes the advantage.

HoloLens 2 vs Magic Leap One: tracking and controllers 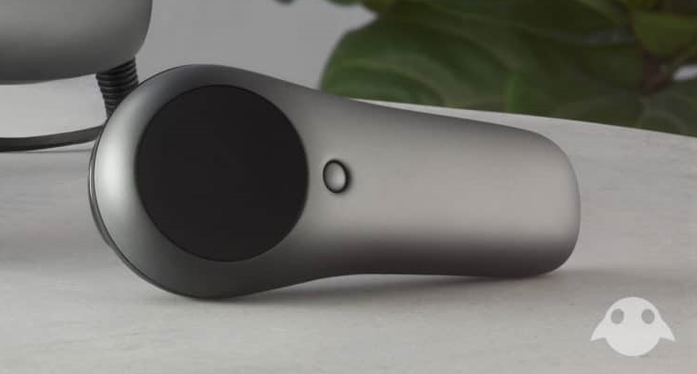 The Magic Leap One comes with its “Control” controller . This controller provides six degrees of freedom of movement without the need for additional external sensors. It is based on a tracking magnetism. It’s this accessory, similar to the VR Oculus Rift or HTC Vive headset controllers, that allows you to interact in the augmented reality of Magic Leap. In general, it works well even if one sometimes regrets problems concerning position tracking.

The Magic Leap One also offers eye tracking and hand tracking features. This last point allows to interact using his hands in a natural way. However, ML1 hand-tracking is less successful than what Leap Motion has been offering since 2013 . In reality, this system does not detect the position of the fingers of the user in space, but to detect predifined gestural commands. They are eight in number.

For its part, the HoloLens 2 stands out with a much improved hand-tracking technology . Indeed, this new AR helmet is able to follow the position of the ten fingers of the user. Thus, it is even possible to play the piano in augmented reality. 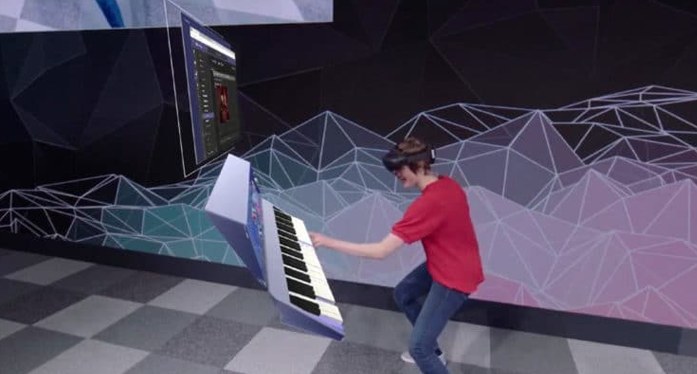 As with the first HoloLens, it will unfortunately still be necessary for the hands to remain in the HoloLens 2’s field of vision for tracking . However, it is likely that a Bluetooth “clicker” is provided with the headset to allow the use of his hands even when they are not perceived by the cameras. This was already the case with the first iteration.

We also find the same eye tracking technology as Lumia smartphones. The Eye Tracking of HoloLens 2 is therefore much more advanced, including unlocking the device at a glance with Windows Hello. Voice recognition has also been improved, and it is now possible to control the device only at the sound of its voice. Freedom of movement is also six degrees.

With its new hand tracking system and voice recognition technology, the Microsoft HoloLens 2 far surpasses the Magic Leap One in terms of tracking and control options.

HoloLens 2 vs Magic Leap One: software platform and interface 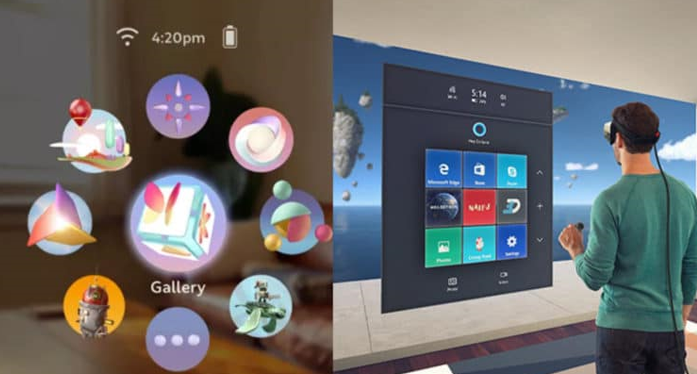 The Magic Leap One runs on the Lumin OS operating system . The interface is nice, responsive, and the sound design is particularly successful. Many, however, lament the lack of information displayed in the “windows”. In addition, this interface seems designed for a 3DoF controller while Magic Leap One Control offers a six-degree freedom. It is thus impossible to touch objects, buttons or menus with his hands, his controller or his head.

The HoloLens 2 turns on Windows Holographic OS. This interface has been improved compared to the first HoloLens. It is now possible to interact by pressing buttons, which was not the case with the first model. In addition, holograms can now track the user rather than stuck.

In general, the HoloLens 2 interface is more convincing than the Magic Leap One interface. This is directly related to the multiple possibilities of interaction offered by the helmet thanks to the technologies of hand-tracking, eye-tracking and voice recognition.

Despite all its qualities, the main weak point of the Magic Leap One at the moment is its lack of applications . This is not really surprising, since it is a new product available recently.

Most of the applications offered at launch are more like technical demos than real-life experiences and take up only a fraction of the possibilities. The Tonandi application makes it possible to transform your environment into an extraterrestrial landscape, while the Project Create allows you to give free rein to your creativity.

The Social application allows you to communicate with other users. Let’s also remember Hélio, the augmented reality web browser. However, despite these good ideas, the Magic Leap One applications will not occupy a consumer lambda more than an hour. It will therefore be necessary to wait for third-party developers to create relevant applications for this AR helmet to become more interesting.

For its part, the HoloLens 2 already offers all the applications available on the first HoloLens . New applications have also been unveiled, such as Microsoft Dynamics 365 Guides for Remote Assistance. Similarly, the developer Spatial has presented a collaboration application in augmented reality for the less impressive.

The HoloLens 2 is therefore one step ahead of the Magic Leap One in terms of content. However, its main weakness is that it is a device specifically for professionals. Therefore, almost all compatible applications are software designed for business use. Fans of video games and other types of entertainment will obviously not find their account.

HoloLens 2 vs. Magic Leap One: Autonomy

Autonomy is an important feature of augmented reality headphones since it determines how long these devices can be used continuously. On this point, the two helmets seem relatively similar.

The Magic Leap One is equipped with a lithium-ion battery offering a battery life of three hours depending on the manufacturer . For its part, Microsoft said nothing about autonomy when launching the HL2. It can be deduced that the autonomy will be similar to that of the first HoloLens, which could last three to four hours depending on the use case.

HoloLens 2 vs Magic Leap One: awards

As you can see from this comparison, the HoloLens 2 is superior to Magic Leap One on almost every level. However, as expected, its price is also much higher.

HoloLens vs Magic Leap One: conclusion 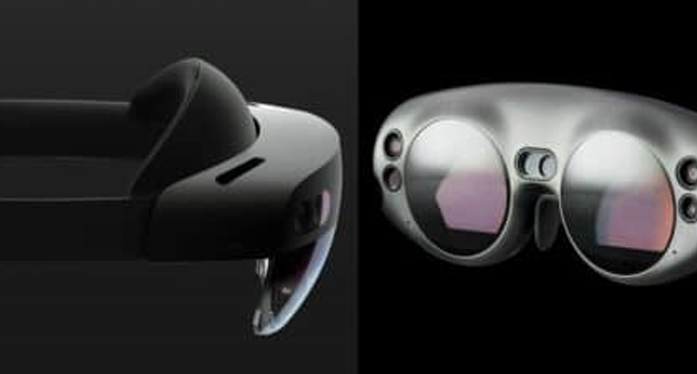 Screen, performance, interface, controls, content … the HoloLens 2 wins the Magic Leap One on almost every point . There is no doubt that Microsoft takes back its title of leader of the augmented reality with this new headset.

While the Magic Leap One costs almost $1000 less than the Microsoft HoloLens 2. It is therefore more accessible to the general public, and Magic Leap’s many partnerships with entertainment companies show that this product is more for consumers than consumers. to businesses.

However, few consumers can afford to buy a $2000 device even if it is cheaper than HoloLens 2. The reason for the Magic Leap One can be questioned.