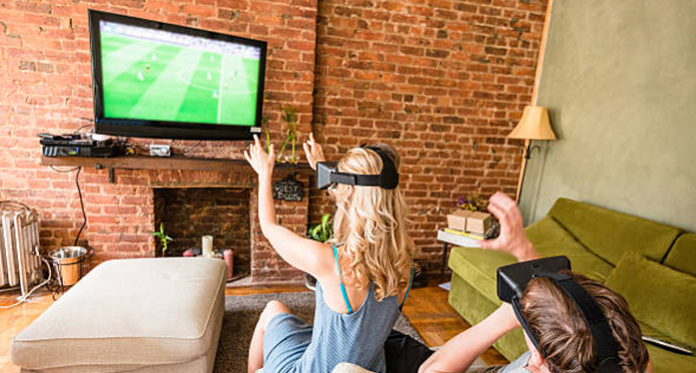 What are the safe values ​​of VR?

That’s it, you cracked! For Christmas, the virtual worlds have settled under the tree, and you have at your feet an Oculus Rift, an HTC Vive, a PlayStation VR or a Microsoft mixed reality headset. Everything is connected, the controllers are calibrated, there is more to dive into this new world. Yes, but here it is: the offer of games and applications is abundant, and it is difficult to navigate the jungle where the worst is the best. Do not worry, and we sorted it out for you. With the successive price cuts and the many promotions between Black Friday and Christmas, it has become fascinating to buy an “upscale” virtual reality headset. Complete solutions are now available for € 400. To take advantage of it, our selection of games and apps focuses on those who have marked us and who we deem essential to realize the potential of virtual reality. We have tried to take titles that are compatible with as many headphones as possible, but some of them remain exclusive, including Oculus RIft or PlayStation VR.

From the first minutes of play, we understand what the strength of Superhot VR is, and why it is one of the best games in virtual reality available on the market: the feeling of being in a classic choreographed action movie John Woo or Matrix way merely is incredible. And this despite the minimalist graphic style. In the first-person view, you cross a series of levels that are as many situations in very delicate situations: three people, pistol point-blank, are about to shoot you down, while two others are running behind you, sword in hand. How are you going to cope?

The twist here is the action is almost stopped when you do not move, allowing you to think carefully about your next moves. Grab a bottle on the ground, throw it in the face of the nearest opponent, catch his weapon in flight, shoot the second with a bullet in the head, while stopping to avoid the sword blow that comes… Superhot RV, right, for 4 to 5 hours. An incredible immersive action game.

If you are looking for a zen and relaxing experience, while seriously working your brains, The Talos Principle VR is the game for you. This porting of a title released at the end of 2014 is here very well suited in virtual reality, with a host of different options and settings, to enjoy the most comfortable experience possible. No fights here, but the exploration of a sunny world and many riddles to solve, based on the observation of the environment. Even if they lack a bit of precision, the movements with the controllers are natural, and the proposed immersion is excellent. Long, beautiful and also well written, The Talos Principle VR is the best “puzzle-game.”

Be careful, if you put your nose in Google Earth you may spend a lot, a lot of time there. We are here faced with a very useful transposition of Google’s great exploration of the planet, perfectly designed for VR. The interface adapts very well to motion-recognition controllers and, above all, the sensation of vertigo is impressive, since it is possible to hover over cities, enjoying a remarkable rendering in 3D. With a quick gesture, you rotate the globe and enjoy the riches that the Earth has to offer, including some breathtaking landscapes. The “Street View” mode allows enjoying splendid 360-degree panoramas. Awe-inspiring exploratory and contemplative experience,

Genre: The effects of drugs, without the dangers

Thumper is one of the few games in this selection that is played only on the controller, sitting quietly. And yet, it’s one of the most intense experiences you’ll ever experience in virtual reality. On a psychedelic circuit, a beetle run at full speed, to the sound of mesmerizing electro / tribal music, which gets rich as the road passes. You have to have particularly sharp reflexes to anticipate turns and hammer at the right moment pad keys to start the sound sequence that will allow you to pass the next checkpoint. Midway between the arcade race and the musical game, Thumper takes another dimension in virtual reality, the image enveloping us in an awe-inspiring way.

Genre: Charming ride to the land of the dead

Exclusive to Oculus Rift, Coco is probably the best experience to try for someone who does not know virtual reality. Taking place in the world portrayed in (the excellent) latest animated film from Pixar Studios, Coco plunges you into Mexican folklore and transports you to a colorful world, made of cute skeletons and sunny music. The realization is particularly successful and, if the interactions are limited to the strict minimum, the immersion remains very present. Know, finally, that the trip can be experienced by many.

Genre: Cluedo of which you are the hero

The Invisible Hours you are both an investigator and a director of your crime scene. Agatha Christie mood for this game of investigation, where the notion of failure does not exist, and where it is up to you to make your version of the truth. The excellent idea of ​​the title, it is not to give a role to the player, if not that of the spectator. The plot, dialogue, and clues unfold before your eyes, as in a movie or a play. Except that here you have total control of time: you can, for example, follow a dialogue between two people, then go back and change rooms to see what a third character does at the same time, in the place next to. It’s also possible to grab a lot of clues, which are then annotated and contained in a large journal summarizing the history and profiles of the various suspects. The concept is frankly excellent, and we take a real pleasure to dive into the intricacies of the plot.

Genre: Travel to the far reaches of music

Initially released in 2001 on Dreamcast and PlayStation 2, Rez seems to have always been designed to be played in virtual reality as its graphics style, and game mechanics have an immersive potential. This “Infinite” version brings all the original content, playable with or without headphones, but also a new level, Zone X, developed specifically for VR. And all of this works incredibly well. Rez is a 3D shoot them up where images and sounds act in symbiosis, creating an extraordinary but mesmerizing universe. The primary game lends itself well to VR, but it’s mostly Zone X that impresses, giving the impression of being an ultra-stylish science-fiction movie.

Genre: If you’re missing “Call of”

Developed by the specialist studio of FPS 4A Games, to whom we owe the perfect Metro 2033 and Metro Last Light, Artkika 1is undoubtedly one of the most beautiful virtual reality games currently available. This Oculus Rift exclusivity immerses you in a poignant and realistic post-apocalyptic universe and offers you to carry out a whole bunch of missions, consisting most of the time to defeat a maximum of opponents. His high strength is the way he stages a sustained action. A weapon in each hand, the sensations of shooting are excellent, despite limited movement. Instead of opting for a conventional displacement system, at the risk of causing nausea, it is possible to point different zones in the levels, to teleport immediately. But the player is not entirely static since he must give his person to take cover and thus avoid a maximum of shooting.