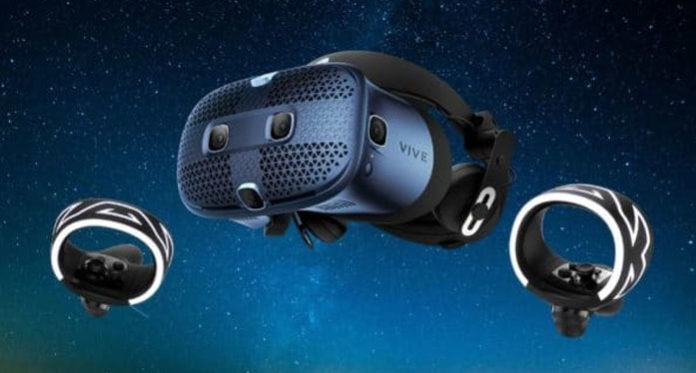 HTC Vive Cosmos is official! With this new VR headset, HTC seems determined to come back to compete with the Facebook Oculus Rift S and the Valve Index. Discover the price, the release date, the technical characteristics and the specificities of this new device.

Originally unveiled at CES in January 2019, the new HTC Vive Cosmos VR headset is finally official. We now know the price, the release date, but also the technical characteristics and specificities of this device.

In terms of technical characteristics, this headset offers a definition of 2880 × 1700 pixels. This represents an increase of 88% compared to the original Vive launched in early 2016. In two years, the definition of the screen has almost doubled…

In addition, like the Valve Index and the Oculus Rift S, Cosmos abandons OLED screens in favor of LCD screens. This makes it possible to limit the distance between the pixels, but also to reduce the grid effect which disturbs many users. The field of view is 110 degrees and the refresh rate of 90Hz, as on previous Vive.

With its completely redesigned design, the Vive Cosmos emphasizes comfort and ergonomics. Thus, the retractable visor “flip-up” makes it possible to return to reality very quickly without removing the helmet entirely. An on-ear audio headset is integrated, and new controllers similar to the Oculus Touch will allow more natural and accurate interactions in VR.

A tracking system without external sensors like the Oculus Rift S

Like the Oculus Rift S, the Cosmos says goodbye to tracking stations in favor of an “inside-out” tracking system that works without external sensors. With this system, the user’s movements will be directly captured by six cameras built into the helmet. This not only facilitates the installation, but also offers a feeling of amplified immersion. In fact, with this new product, HTC is catching up with its rival Oculus.

However, the main strength of Vive Cosmos is its modularity. You can connect different modules to the front panel to add features or customize the device. This is a great first in the industry.

As a first step, the “External Tracking Mod” module, planned for the beginning of the year 2020, will leave those who wish to use the new helmet with Lighthouse tracking stations for a more precise follow-up.

Over time, different modules will be marketed to enrich the experience offered by the device. However, HTC has not yet revealed what other modules are in preparation…

In addition, Vive Cosmos is the first VR headset compatible with the new Vive Reality operating system specially designed for virtual reality. Rather than a simple menu inspired by traditional interfaces, this system offers to dive directly into a virtual world from which it is possible to launch other applications.

The headset also comes with a 12-month subscription to the Viveport Infinity service, providing access to a vast catalog of games and videos. This subscription will be offered to anyone who pre-orders the Cosmos before October 2, 2019. The pre-orders are open now, and the device will be available from October 3, 2019 in Europe for a price of 799 euros.