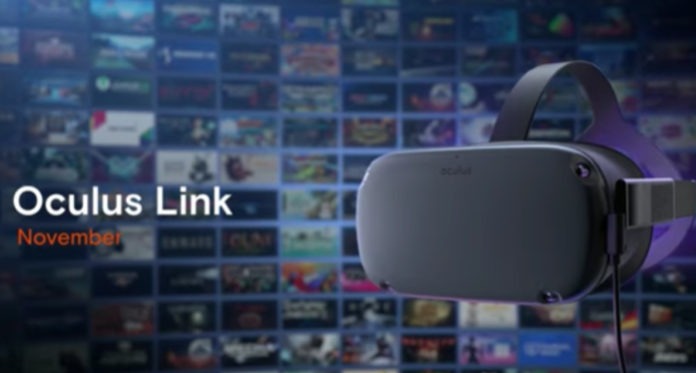 Oculus Quest offers many virtual reality games but, from today, you can also play games from the Rift catalog with your Quest thanks to Oculus Link. Here are the top 10 games not to be missed …

Now available as a beta, the Oculus Link requires a Type 3 cable to connect to a beefy computer. If you have all these things, you can access a bunch of PC VR content. However, which games and applications should you test first? There is already a long list of the best Oculus Rift games and SteamVR, but they overlap a lot with those already on Quest. You are of course free to consult them but, for this list, our colleagues of Upload VR have focused on experiences that are not part of Quest natively. With this in mind, here are 10 essential Oculus Rift apps and games to play on Quest via Oculus Link.

Three and a half years after the launch of PC VR, The Lab remains one of the best experiences on the platform. Valve’s mini-games collection offers a taste of its iconic brand of humor and, more importantly, a model of incredible virtual reality interactions that separates this new technology from its traditional gaming roots. Plus, it’s free, and you cannot really do without it.

Ultimate Gorn battles would probably have a hard time integrating with Quest natively, so we recommend you take them back to Oculus Link without hesitation. In this gladiatorial fighting game, you impale, dismember and crush your enemies with a wide range of weapons. It is ridiculously gore and quite hilarious, refined over the years of early access development.

Rockstar holds the keys to some of the best virtual worlds on the market. LA Noire may not be among GTAV and Red Dead 2, but her dedication to authenticity still makes it an essential setting to explore with a virtual reality headset. VR Case Files is an original game to revive investigations in virtual reality. This is one of the most refined experiences you can live on the platform.

Nobody expected Hellblade: Senua’s Sacrifice to get an adaptation to virtual reality. Better yet, no one expected such an adaptation to work as well. And yet, Hellblade VR is an eloquent example of the use of VR ports, with fantastic visuals and chosen moments that work even better inside the helmet. If you already own the game, this is a free update, so do not forget to download it.

Bethesda has done an incredible job in bringing his legendary role-playing game to VR PC headsets, offering a huge open world to explore with hours of questions to solve. Plus, when you add mods, Skyrim VR becomes its own metaverse of possibilities.

5. Wolves in the Walls: A film not to be missed

There are a lot of incredible VR experiences right now at the crossroads of games, movies, and something new. Star Wars: Vader Immortal shows us that in Quest, but for our money, Wolves in the Wall by Fable Studio is the best example to date. This interactive story connects you to a girl. The fable goes to great lengths to make the link between you as natural as possible. If you’re looking for something other than games, this is a great place to start.

An infinite universe of planets to explore, adventures to live and friends to work with. This is the promise of the ambitious No Man’s Sky VR update and, although its launch was marred by technical problems, Hello Games has corrected the situation. This is the original full game with support for the sensation of virtual reality, which gives you an infinite amount of content to enjoy.

Insomniac Games makes the list again with its most recent title, Stormland. This is a first-person shooter with incredible immersion in which you cross a series of islands connected by a sea of ​​clouds. A fluid and free movement system makes it one of the most liberating experiences of virtual reality. Live features and cooperation in two-player mode make it a good solution.

Lone Echo was one of the pioneers of the weightless locomotion system now well-liked for virtual reality. In addition to this, the game offers incredible graphics, a thoughtful rhythm and a beautiful story, animated by strong characters and the links you develop with them. In addition, you must play before the launch of Lone Echo II and you can train a little before the release of Echo VR on Quest.

We recently reported that Asgard’s Wrath is currently the best game in virtual reality. This is the gigantic role play, a native of virtual reality, awaited by many fans, which takes you on a tour of the Nordic mythology and adds fierce fighting in hand-to-hand combat and brilliant animal companions.

Insomniac’s debut in virtual reality has given us one of the most exciting games. You can think of this as a mix between Uncharted and Dead Space. It’s a third-person horror game in which you go to the Arctic looking for a lost expedition. Inspired by the work of HP Lovecraft, the game presents a scary fall in madness not to be missed.