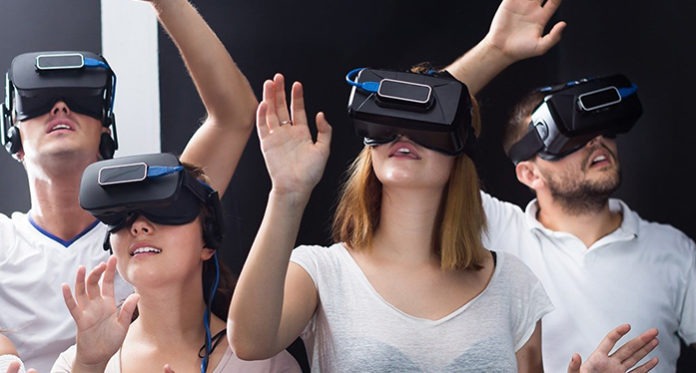 Many people have had an opportunity to experience VR. However, very few of them are aware of the beneficial business side of it. Can your marketer answer the question of how to monetize virtual reality?

What concerns entertainment and media business patterns, it is possible to distinguish three main models. First comes the content for which people pay on account, then some additional or downloadable content. The third model is ads based content.

Every day VR technologies are being implemented into many business areas. Since this innovation allows communication with the audience and provides new ways of interacting with potential clients, many marketing managers and PR directors are using this highly-popular theme within their products

The right presentation of virtual reality can be the key to many opportunities. As human behavior analysis shows, due to VR people receive positive emotions together with an extraordinary experience. That’s the reason why today’s many companies are willing to organize VR centers and other VR-related events so that people would spend an almost life-changing time there.

For example, world-famous brands such as Volvo, Mercedes, McDonald’s and others have used short games for Google Cardboard. The fact that we live in a world full of modern technologies and almost everything we might need may be found on our smartphones makes it even easier for VR to become a crucial part of our everyday life.

But are there any paths through which you can monetize VR? Take a look at the main methods:

Advertising within the games can be a classic tool of monetizing virtual reality. Moreover, this method allows us to increase income at the same time – while placing ads, the application itself can come free.

Another good option is in-game gifts. Players have a chance to gift their friends; as a result, this small act would stimulate users who are not active to enter the game again. Sounds like a nice way for a company to gain profit through their games.

Have you ever heard of cross-marketing? A so-called affiliate market is a place where users can promote different applications of different companies within the games and also promoting their games in other applications.

The freemium (free+premium) business model may also become quite useful. A free version has lower functionality and limited access to additions, while premium one is more advanced. A full-functioning game requires payment, but the price should be reasonable. 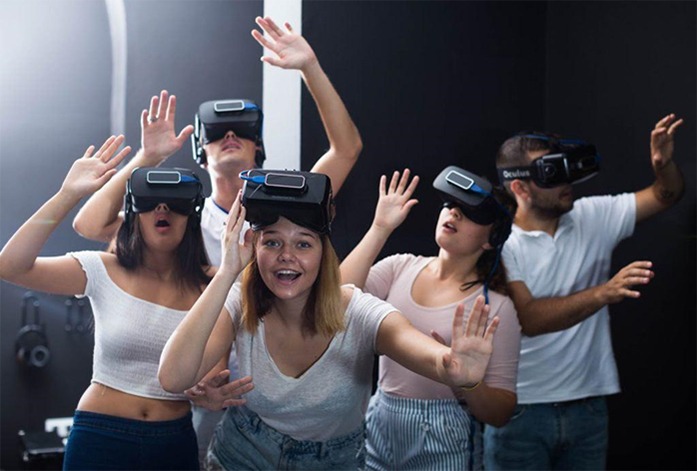 The first industry where 360-degree VR’s appeared was the real estate. This technology was used primarily for decreasing the time spent on observing the sceneries. However, today almost every business sphere uses 360 virtual tours for various aims: rate and sale, fashion, design and many others. Sound effects, music, and narration are also used in 360-degree VR.

360-degree VR has no limits. For example, a VR tour can be created for the/an examination of the certain construction industry. In this case, a user could see different construction processes and their future forms. Since there’s the option of social media sharing, such a scenario is suitable for almost any manufactured or customized products (like showrooms, exhibitions, photoshoots).

Virtual reality allows us to view exterior and interior variations of a future apartment or to apply VR decoration with furniture if the work is still in progress. Thus it’s a rather efficient tool for both selling and buying an estate.

One can take a virtual tour and see rooms and apartments with their own eyes. Potential clients have all these observing options of the areas of many kinds of property while real estate agents are getting more buyers and offering top-level service.

Moreover, with the help of Virtual Tour Easy free app creating a VR tour is much easier and time-saving. 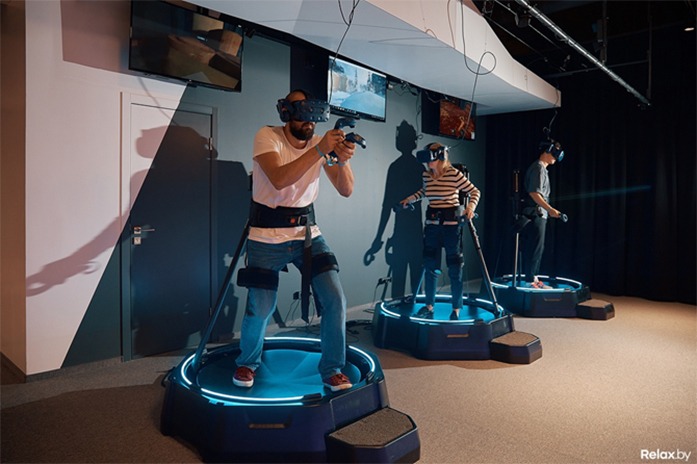 Location-based (LB) VR is a popular path of monetizing. It’s based on the practice of additional fees that give access to a particular interaction. Game instant revenues (VR-on-wheels, VR arcades, etc.) are also available. Unlike home content use, LB VR gives direct monetization. That’s why it takes the first place on the list of the most prosperous VR experiences.

Forbes’ reports show that location-based VR is widely presented in many popular places such as movie theatres, shopping centers, and others. A partnership of AMC Entertainment and Dreamscape Immersive is worth mentioning as a perfect example of a union directed at VR centers launch.

Another good example of companies trying to discover the full potential of VR arcades and VR escape rooms is Avatarico with its latest LB VR escape game called “Cosmos”. Users experience fascinating zero-gravity flights, they fight against evil machines and are able to interact with VR objects using their own hands only. This experience unfolds Leap Motion and HTC Vive room-scale tracking full potential and hosts up to six players who are pushed into constant cooperation.

VR arcades have been existing for years so far. VR Arena is usually a room where the gaming process takes place. It works due to high-end headsets and trackers.

If you’re a company that already has its own VR arcade, it may be quite difficult to make a good profit and receive positive feedback. For sure, LB virtual reality has various aspects and perspectives. The one can turn out to be successful (Avatarico, Hologate, The Void), however, another one cannot (IMAX). Despite this gaming centers still attracting visitors even after years.

In 2017 Virtuix (famous for its Omniverse Esports) entered the LB field with the VR ARENA attraction announced. The latter hosts up to four players simultaneously and was designed as a high-velocity virtual reality e-sport attraction. One of the main Virtuix ARENA advantages is that its Omniverse platform contains more than 20 games to pick from.

A lot of players are fascinated by VR arenas and LB VR, so the support of these technologies is becoming even stronger.

First, you should define the target and scale before choosing a certain location-based VR. For example, if you have a theme park and you want to contact customers with no concern for a particular VR attraction but profit, then a warehouse-scale VR will become a safe bet in your case.

Besides, you can build a virtual reality park that combines both warehouse-scale VR and escape rooms. If you have the dream of opening a sort of a corner-shop, virtual reality arcades will hit the nail of the head. 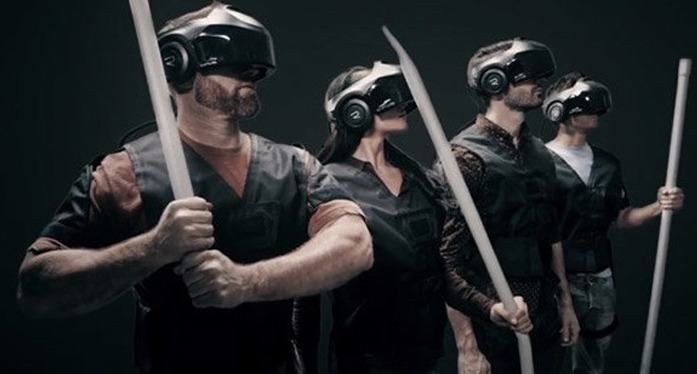 No one wants to have much higher expenses in comparison with the income. In this case, virtual reality equipment hire may help you with this problem – by saving money on paying rent and hiring specialists who are going to maintain a company’s development.

This particular method seems to be efficient for those who’re attempting to enter VR. A few steps are required: the creation of an official website, high-quality VR equipment acquisition and finally advertisement provision (SEO, SMM). All the necessary things can be stored at home and be delivered on request.

Since not all customers are willing to buy expensive VR equipment and waste their time on creating special accounts or choosing games to prepare for a certain event, there is a chance to be the one that supplies it. Further, you may also participate in various VR demonstrations when visiting another city.

Due to its potential virtual reality expediency is very high. Many startup projects turn into clubs with their own games and equipment after some time following this path.

After all, the perspectives of monetizing VR are obvious. Moreover, it’s easy to get acquainted with VR as its assimilation has been slow, but VR has already become transformative in ways that are frequently unseen to the common consumer.

The enormous potential of VR implementation in many spheres of life such as education, medicine, manufacturing, design, etc. is one of the main reasons in favor of virtual reality. This will unavoidably lead to the question of innovative solutions sharing across the globe with location-based VR as a hopeful part of it.

Without a doubt, media innovations of the past are the roots of technology as we know it today. VR would never exist if it wasn’t for them and that what allows it to be a workable product. Nevertheless, virtual reality needs 3 main conditions to start bringing profit, which are the audience, quality content, and top-line hardware at a reasonable price. As soon as these steps are completed VR monetization will come true.