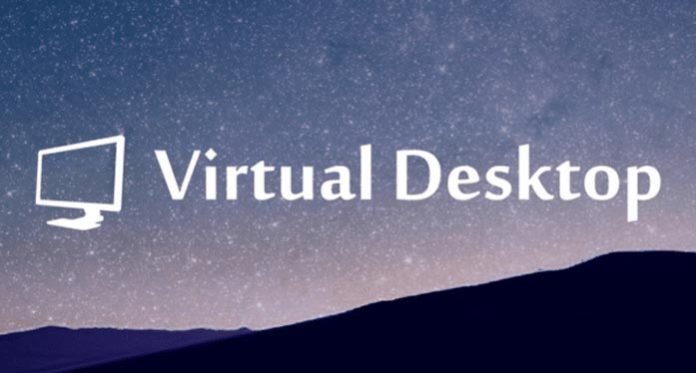 Until now, the Virtual Desktop software was able to play PC games on Oculus Quest or Oculus Go with a Bluetooth controller such as the Xbox controller. A nice feature, but that requires to own such an accessory and take the time to synchronize it with the headset.

For added convenience, Virtual Desktop is launching the new “Use Touch controllers as gamepad” feature. This simply allows you to use the Oculus Quest Touch MotionControllers as a “virtual” Xbox controller.

It will be possible to play any PC game in the VR directly with the Touch. The option can be activated very easily and directly from the VR in a few seconds.

Virtual Desktop: a preview of a future without physical screens

With this update, the parameters related to the controls are now grouped in a new “Input” tab. This way, users will be able to easily modify the Virtual Desktop controls and activate the gamepad mode.

Although the Touch are not joysticks, the operation is rather convincing. By combining the two accessories, we find the different elements of a controller: two joysticks, four buttons, two triggers, a menu button, and two “grip triggers”. Although it lacks a “D-Pad” and a start button, the gameplay is rarely impacted.

The user can choose to display PC games on different virtual environments such as a home office or a cinema screen. Virtual Desktop is available on Oculus Quest for $19.99.

From time to time the latency or the drop in the number of frames per second can be a problem, but the experience is very convincing overall and foreshadows a future in which the VR/AR headsets will completely replace our physical screens…